It is often convenient to use a central value to summarize a set of data. There are several different ways to find values
around which a set of data tends to cluster. Such measures are known as Measure of Central  Tendency .

Mean– the sum of the values of a variable divided by the number of values. Some times the mean is also referred
to as the average.    \(\frac{\sum x}{n}\)  (the symbol ” p” is used for a population and  x̄ is used for  sample)

Median – the middle value of the data when they are ranked from highest to lowest. When there is an even
number of values, the median is the midpoint between the two middle values.

Mode – the value occurs the most frequent in a distribution. Some distributions do not have a mode, while others have several.

Outliers  – the value(s) that are distant from the majority of the data. Outliers have a greater effect on the mean than on the median when the sample size is small.

Weighted Mean  –Weighted mean is a kind of average. ln stead of each data point contributing equally to the final mean, some data points contribute more “weight” than others.

A deviation is the difference between an individual value in a set of data and the mean for the data.

Note: If we simply add up the deviations for a data set, they will add to zero. 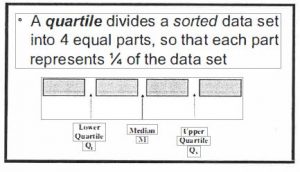 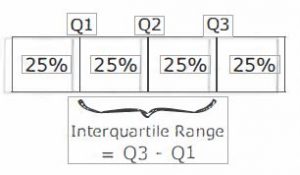 Semi-interquartile Range (SIQR} is one half of the IQR. Both the IQR and SIQR indicate how closely the data are clustered around the median.

MODIFIED BOX-AND-WHISKER PLOT is often used when the data contains outliers. By convention, any point that is at least 1.5 times the box length away from the box is considered an outlier and is represented by a dot. This usually gives a clearer illustration of the distribution.

LINEARITY : We determine whether the points follow a linear trend or in other words approximately form a straight line.

STRENGTH : We want to know how closely the data follows a pattern or trend. The strength of correlation is usually described as either strong, moderate, or weak.

OUTLIERS : We observe  and investigate any outliers. or isolated points which do not follr.1w the trend formed by the main body of data.
if an l1utlicr is the result of a recording or graphing error. it should he discarded. I Howcvcr. if the outlier proves to be a genius  piece of data. it should be kept. 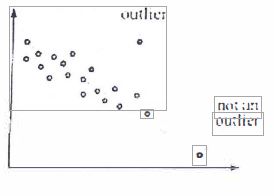 CAUSATION : Coordination between two variable docs not necessarily mean that one variable causes that other. 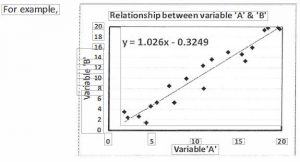 When two variables have linear correlation, you can develop a mathematical model of the relationship between the two variables by finding a line of best fit. You can then use the equation for this line to make predictions by interpolation and extrapolation. 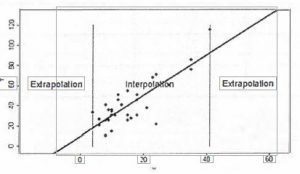 The equation for the line of best fit is given by: 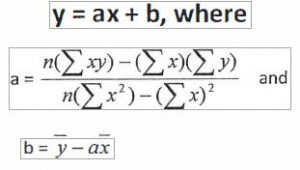 Note: The “line of best fie “is also known as the “least squares line”