We often wish to look at the relationship between two things (e.g. between a person”s height and weight) by comparing data for each of these things. A good way of doing this is by drawing a scatter diagram.

“Regression” is the process of finding the function satisfied by the points on the scatter diagram. Of course, the points might not fit the function exactly but the aim is to get as close as possible. “Linear” means that the function we are looking for is a straight line (so our function f will be of the form f(x) = mx + c  for constants m and c).

Here is a scatter diagram with a regression line drawn in: 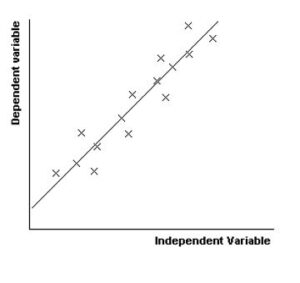 Correlation is a term used to describe how strong the relationship between the two variables appears to be.

We shall use “x” for the explanatory variable and “y” for the response variable, but we could have used any letters.

If there is very little scatter (we say there is a strong correlation between the variables), a regression line can be drawn “by eye”. You should make sure that your line passes through the mean point (the point (x,y) where x is mean of the data collected for the explanatory variable and y is the mean of the data collected for the response variable).

If there is a perfect correlation between the data (in other words, if all the points lie on a straight line), then the two regression lines will be the same.

This is a method of finding a regression line without estimating where the line should go by eye.

If the equation of the regression line is , we need to find what a and b are. We find these by solving the “normal equations”.

The “normal equations” for the line of regression of y on x are:

The values of a and b are found by solving these equation simultaneously.

For the line of regression of x on y, the “normal equations” are the same but with x and y swapped.

The product moment correlation coefficient is a measurement of the degree of scatter. It is usually denoted by r and r can be any value between -1 and 1. It is defined as follows:

The product moment correlation coefficient (pmcc) can be used to tell us how strong the correlation between two variables is.

If there is a perfect positive correlation (in other words the points all lie on a straight line that goes up from left to right), then r = 1.

If there is a perfect negative correlation, then r = -1.

If there is no correlation, then r = 0. r would also be equal to zero if the variables were related in a non-linear way (they might lie on a quadratic curve rather than a straight line, for example).