The Normal Distribution is the most important distribution for a continuous random variable. Many naturally occurring phenomena have a distribution that is normal, or approximately normal. Some example are:

• Physical attributes of a population such as height and weight
• Crop yields
• Test scores taken from a large population.

Once a normal model has been established, we can use it to make predictions about a distribution.

For a normal distribution with mean µ and standard deviation σ, the proportional breakdown of where the random variable could lie is given below.

Use the Standard Normal Table to find the cumulative area under the standard normal curve.

For a normal distribution, X; 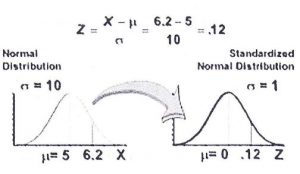 Areas under the normal curve can be found on the graphing calculator using the normal(function from the DISTR menu. The syntax for this function is: normal (lower bound, upper bound, mean, standard deviation)