3.1- Introduction
• Calculate unknown angles and give simple explanations using the
following geometrical properties:
(a) angles at a point
(b) angles at a point on a straight line and intersecting straight lines
(c) angles formed within parallel lines
(d) angle properties of triangles and quadrilaterals
(e) angle properties of regular and irregular polygons
(f) angle in a semi-circle
(g) angle between tangent and radius of a circle
(h) angle at the centre of a circle is twice the angle at the circumference
(i) angles in the same segment are equal
(j) angles in opposite segments are supplementary 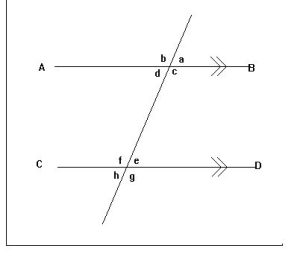 Lines AB and CD are parallel to one another (hence the » on the lines).
a and d are known as vertically opposite angles. Vertically opposite angles are equal. (b and c, e and h, f and g are also vertically opposite).
g and c are corresponding angles. Corresponding angles are equal. (h and d, f and b, e and a are also corresponding).
d and e are alternate angles. Alternate angles are equal. (c and f are also alternate). Alternate angles form a ‘Z’ shape and are sometimes called ‘Z angles’.
a and b are adjacent angles. Adjacent angles add up to 180 degrees. (d and c, c and a, d and b, f and e, e and g, h and g, h and f are also adjacent).
d and f are interior angles. These add up to 180 degrees (e and c are also interior).
Any two angles that add up to 180 degrees are known as supplementary angles.

3.3- Triangles and Quadrilaterals
Using some of the above results, we can prove that the sum of the three angles inside any triangle always add up to 180 degrees.

A quadrilateral is a shape with 4 sides.

3.7- Assessment 3
Question 1- Calculate the sum of interior angles of an octogon and a decagon?
Question 2- Which of these shapes has the most sides? Hexagon, Octagon, Triangle, Rhombus.
Question 3 – AB, CD and EF are straight lines. We assumes that AB and CD are parallel. What is the angle y? 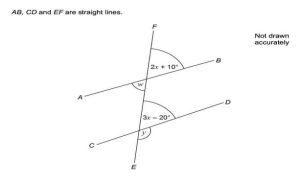