9.1 Moments in Statics
The moment of a force is
Moment = Force x r (positive is anticlockwise) 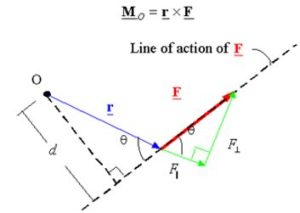 To solve problems :
– Draw a diagram showing all the forces
– Take moments about any point O. The moment of the Force passing through O is zero
– Resolve the forces along the x-axis and along the y-axis

Types of problems in statics :
Ladder against a wall
– Inclined plane
– A door
– An object in equilibrium held by 2 strings of unequal length